About the gold alloys:

Why is gold "alloyed"?

Pure gold is rarely processed due to its very low hardness.
To improve its wear properties it is alloyed, i.e. mixed with other metals such as silver, copper , palladium, titanium or gallium in different proportions.
The numbers 990, 900, 750, 585, 333 relate to the amount of fine gold contained in the alloy.

The main advantages of the 750% gold (the old name is 18 carats) are its beautiful color and its noble character (under normal use/everyday it never tarnishes).

This means that from a weight fraction of 75% "only" 52% gold atoms are actually present. (The density of gold is 19.3 g cm² / approximately twice as high as that of the additive metals)

The fact that these 50 % (or more) are a distinct advantage can be easily explained by the properties of pure gold:

Gold is such as platinum and its by-metals, a high noble metal and can thus protect base metals by its mere presence from oxidizing/sulfiding, but only one non-noble atom per gold-atom.
Is less gold available than filler metal (e.g. gold 585 with 38 % volume) some base atoms can "fly" unprotected between the gold-atoms and can oxidize, sulfide, corrode (produce stains in gold), and in the worst case even after years of normal wearing lead to allergies or cracking!

The prejudice 585% Gold would be so much harder than 750% Gold is at the present time with new manufacturing processes and alloys simply no longer valid. (Even the old 750% alloy is only slightly softer.)

Unfortunately, some jewelers continue to spread this "argument" as so called "jewelry sales experts". The reason is as ugly as it is simple: 585% gold has a higher profit margin .... one of many reasons why goldsmiths don't like to be called a jeweler ;- )

White gold does not exist. Gold is yellow in nature and was only in 1921 with alloying additions (nickel) colored as white as possible as an affordable alternative to platinum.

At the beginning, this discoloration was achieved by using large amounts of nickel. Since it is now longer allowed to alloy gold using any desired amount of this metal (approx. 30% of people are allergic to nickel), our white gold is colored white using palladium, a metal from the platinum group. Palladium may be much more expensive but only very rarely causes allergies.

You can find all addresses and phone numbers of our 12 branches in the navigation menu  workshop when you select the corresponding city. 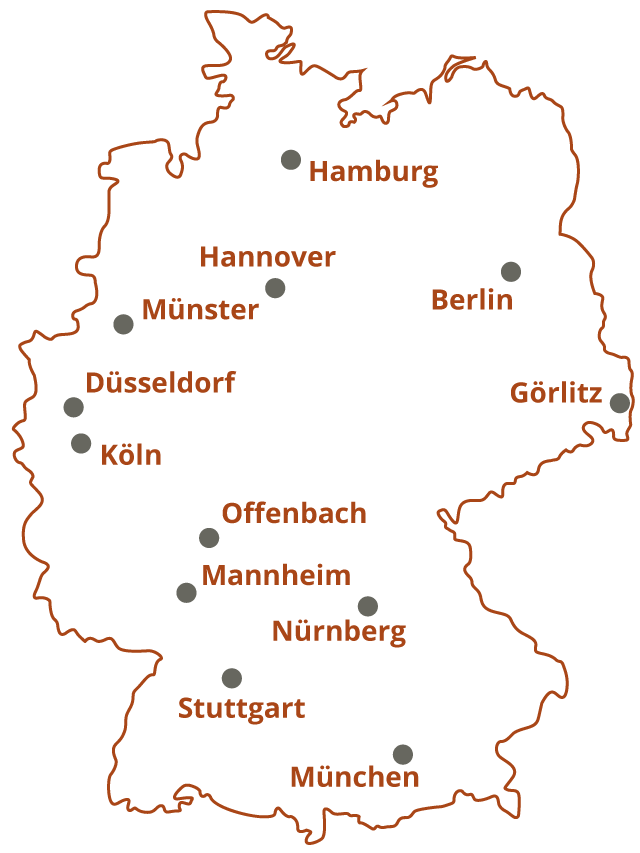